A team led by Viviane Slon and Svante Pääbo of the Max Planck Institute for Evolutionary Anthropology, in Leipzig, Germany, carried out genetic analysis on a fragment of bone, more than 50,000 years old, found in a cave in Russia. This find, however, is the first evidence that the other two human species were interbreeding too. The previous Altai Neanderthal study also suggested that Neanderthals starting breeding with archaic modern humans around 100,000 years ago, but the new analysis pushes that back even further to between 130,000 to 145,000 years ago.

The discovery of a teenage girl with a Neanderthal mother and a Denisovan father shows they were happily participating in the practice. All in all, these findings suggest that modern humans, Neanderthals and Denisovans intermingled when they encountered each another, Pääbo said. It was this DNA from Croatia that enabled the MPI team to sequence the Neanderthal genome for the first time.

Based on previous archaeological and genetic evidence, archaeologists and anthropologists suspected that Neanderthals were thinly dispersed across Europe and Asia. The lack of genetic diversity ( low heterozygosity ) in the Vindija 33.19 specimen affirms these earlier findings, showing that Neanderthals “lived in small and isolated populations” and “with an effective population size of around 3,000 individuals”, the researchers write in their study. But the Vindija 33.19 genome is different; her parents were not as closely related, so we can no longer say that extreme inbreeding is a common fixture of the Neanderthals.

According to David Reich, a geneticist at Harvard Medical School and a member of the research team, the new DNA sequence also shows that Native Americans and people from East Asia have more Neanderthal DNA, on average, than Europeans. This suggests that humans and Neanderthals interbred about 50,000 years earlier than previously thought. Now, a new study is exploring the legacy of these interspecies trysts, with a focus on Western Asia, where the first relations may have occurred.

The research team analyzed genomic data from dozens of Western Asian individuals, and observed that, on average, with a few exceptions, these populations carry less Neanderthal DNA than Europeans, Central Asians and East Asians. Neanderthals and Denisovans may have disappeared just because they were absorbed into modern human populations.

We are now in an era where whole genome information can be obtained directly from ancient human skeletons discovered at archaeological sites. The present international research team, led by researchers from the University of Copenhagen with the participation of three researchers from Kanazawa University has established technologies to efficiently extract human DNA from skeletons discovered at prehistoric remains even under very poor conditions for DNA preservation.

Upon comparison of the genomic data of ancient human skeletons with those of present – day human skeletons, it has become clear that those prehistoric populations in Southeast Asia can be classified into six groups. Conventional archaeology proposed the two – layer hypothesis that, in those periods, a large population with farming culture with rice and millet migrated into Southeast Asia and that they replaced the indigenous population.

The analysis showed that Denisovans were much more closely related to Neanderthals than to Homo sapiens, and that in spite of coming from a small population, they managed to contribute genes to modern populations in Island Southeast Asia and Australia. 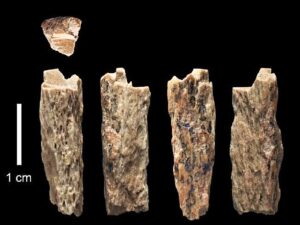 It seems we are still in the early stages of understanding the material found in this small cave in Central Asia. Modern humans first moved into the region of Island Southeast Asia as early as 65,000 years ago, heralding the seaborne colonisation of Australia and New Guinea. The other is the Denisovans, whose DNA is known only from a finger bone found in a Siberian cave.

From fragments of DNA in a 50,000-year-old finger bone, scientists have identified a fascinating new character in the story of our evolution : the first – known offspring of parents from two different branches of the human family tree. Modern genetic analyses suggest that people of European and Asian ancestry have roughly 2 per cent Neanderthal DNA, and some East Asians and Pacific Islanders can trace as much as 6 per cent of their genetic material to the Denisovans. The intermingling was pervasive enough that some scientists question whether our extinct cousins should be considered a subpopulation of Homo sapiens, rather than a distinct species, as they are typically defined today. Both groups shared a common ancestor who migrated out of Africa a few hundred thousand years before that.

Around the same time, the Eurasian population of a new primate – Homo sapiens – began to explode. These two groups inhabited Eurasia – Neanderthals in the west and Denisovans in the east – until they were replaced by modern humans around 40,000 years ago.

Initially, Viviane Slon, a graduate student involved with the study thought that she must have made a mistake. A female who died around 90,000 years ago was half Neanderthal and half Denisovan, according to genome analysis of a bone discovered in a Siberian cave. Together with their sister group the Neanderthals, Denisovans are the closest extinct relatives of currently living humans.

“So, we are pushing back about 50,000 years the time that modern humans and Neandertals met outside Africa ” , co – author Sergi Castellano of the Max Planck Institute for Evolutionary Anthropology told ZME Science.

Evolutionary biology is experiencing its most serious division over the structure of evolutionary theory since the development of the Modern Synthesis nearly 100 years ago.