“The space dream is part of the dream to make China stronger”, President Xi Jinping said after becoming the country’s leader in 2013. The China NSA said the 10:26 a. m. touchdown of the Chang’e 4 craft has “opened up a new chapter in human lunar exploration.

On the whole, China’s space technology still lags behind the West, but with the landing on the far side of the moon, we have raced to the front, said Hou Xiyun, a professor at Nanjing University‘s School of Astronomy and Space Science.

In 2013, Chang’e 3, the predecessor craft to the current mission, made the first moon landing since the former Soviet Union’s Luna 24 in 1976. The moon’s far side is sometimes called the dark side because it faces away from Earth and is relatively unknown. Chang’e 4, a combined lander and rover, will make astronomical observations and probe the composition of the soil.

The far side of the moon is a rare, quiet place that is free from interference from radio signals from Earth, mission spokesman Yu Guobin said, according to the official Xinhua News Agency. This probe can fill the gap of low-frequency observation in radio astronomy and will provide important information for studying the origin of stars and nebula evolution. 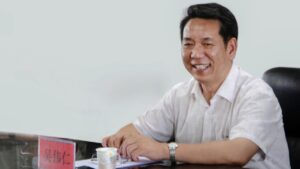 China conducted its first crewed space mission in 2003, following Russia and the U.S. Its space program suffered a rare setback last year with the failed launch of its Long March 5 rocket. “Building a space power is a dream that we persistently pursue”, said Wu Weiren, the chief designer of the China Lunar Exploration Project, speaking with CCTV at the Beijing Aerospace Flight and Control Center. It has a different composition than the near side, where previous missions have landed.

China launched a relay satellite in May so that Chang’e-4 can send back information. The chang’e-4 lunar probe mission – named after the moon goddess in chinese mythology – launched on a long march 3b rocket from the Southwestern Xichang launch centre at 2.23am ( 1823 GMT), according to the official Xinhua news agency.

This is one of the first times they’ve done something that no one else has done before. It is no easy technological feat – china has been preparing for this moment for years.

Chang’e-4 is being sent to the Aitken Basin in the lunar south pole region – known for its craggy and complex terrain – state media has said. The experiments also involve planting potato and other seeds, according to Chinese media reports. Chang’e-4 will be the second chinese probe to land on the moon, following the Yutu ( “Jade Rabbit” ).

During the lunar day, also lasting 14 earth days, temperatures soar as high as 127 C ( 261 F ). the rover’s instruments must withstand those fluctuations and it must generate enough energy to sustain it during the long night. Yutu conquered those challenges and, after initial setbacks, ultimately surveyed the moon’s surface for 31 months. Beijing is planning to send another lunar lander, Chang’e-5, next year to collect samples and bring them back to earth. it is among a slew of ambitious chinese targets, which include a reusable launcher by 2021, a super-powerful rocket capable of delivering payloads heavier than those NASA and private rocket firm SpaceX can handle, a moon base, a permanently crewed space station, and a Mars rover. The project, he said in an interview with local website Netease, “greatly inspires everyone’s national pride and self-confidence” .

The lander will conduct the first lunar low-frequency radio astronomy experiment, observe whether plants will grow in the low-gravity environment, and explore whether there is water or other resources at the poles. The Chang’e 4 rover is 1.5 meters ( 5 feet ) long and about 1 meter ( 3.3 feet ) wide and tall, with two foldable solar panels and six wheels.

We worked hard to improve its reliability, conducting thousands of experiments to ensure its long-term operation, especially taking into consideration rocks, ravines and frictions on the moon, Wu Weiren told state broadcaster CCTV in August.

In comparison, despite its recent success in sending a robotic lander to Mars, the US space agency NASA has faced years of budgetary constraints. The US Congress has barred NASA from working with China due to national security concerns.